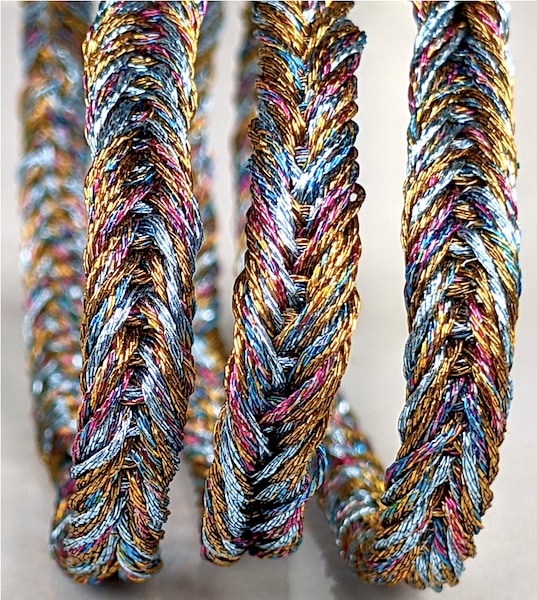 Up to date as of 5/14/2022. This page will be updated again before class time and possibly after.

This page is a conveniently clickable group of things I mention in the new Crochet Herringbone Chains class. This two-day class will be held Wednesday, May 18 & Thursday May 19, 2022 at 1:00 pm – 2:00 pm Central Time.  — Vashti Braha

Herringbone chains are naturally sleek, strong, dense and flatter than regular crochet chains. This makes them as useful for functional reasons as for decorative ones. They twist up less than regular chains. This type of chain stitch has the same structure as the decorative military bugle cord that knot tyers traditionally make. They have a single bugle, double bugle, triple and more; we’ll learn how to crochet all of these!

Flickr photo album for this class. A great way to see class material at full resolution, and an array of new uses and variations. I use stitch albums like this one for my own reference. I’m continually creating swatches and photos to add to this album.

My Pinterest Herringbone Chains Pin Board created for this class topic. It compares the look of herringbone chains with other arts–beading, leatherwork, embroidery, etc.

This reversible crochet mask lanyard attaches to each ear loop of a face mask with 100% crocheted fasteners. No sewing on buttons or metal hardware!

Wear the lanyard around your neck. If you remove your mask, there it hangs, already found, like wearing reading glasses on a chain.

The chain loop end attaches with a lark’s head knot, explained below. The other end has a crocheted peg-like “shank” button. It loops around the other ear loop and buttons into a stitch space of the lanyard. This makes the length easy to adjust. The mask loops can be any thickness.

My favorite thing about this pattern is that it’s “hook-only”: 100% crochet, even the fasteners.

My second-favorite thing is it’s a chance to use my new rosebud button idea for a project. It’s reminiscent of a Chinese frog closure, but like I say, no sewing! Also, unlike some button knots, zero chance of it coming unknotted.

And, third, this pattern doubles as a versatile template. I’m already borrowing individual elements from it. The lacy pink love knot lanyard has the same chain-loop end, rosebud button end, and even a few repeats of the blue cord to serve as buttonholes (near the button end). If you have a cord pattern you like, add a few elements from this pattern to keep it hook-only.

A PDF version of this pattern was emailed to members of the Crochet Guild of America (CGOA) as a part of a Holiday Shopping Guide, December 1, 2020.

21 inches {53.34 cm} long. Length is determined by the number of pattern repeats so it’s easy to choose a different finished length.

Chain 12. Hdc in 12th ch from crochet hook to form a ring.
This is the fastening loop.

Why crochet a face mask lanyard? Is it better to crochet one?

Crocheting a lanyard is easy and fast, especially when you can also crochet the fasteners. Crochet makes a strong and durable lanyard with very little yarn (about ten yards).

Are crocheted lanyards washable and comfortable to wear?

Yes: use a soft, washable yarn. It’s comfortable and almost weightless. I forget that I’m wearing it sometimes.

How much yarn do I need to crochet a mask lanyard?

The pretty blue one shown here required only ten yards of a sport weight cotton yarn, and a size E (3.5 mm) crochet hook. Even the lanyard clips are crocheted!

“Mask holder” and “mask extender” usually refer to a small strip that has a button at each end. Wear it to eliminate pressure or irritation behind the ears. It shows at the back of the head where the ear loops of the mask hook around the buttons instead of the ears. Another term is “ear saver”.
“Mask chains” and “mask lanyards” drape around the neck like necklaces. It’s the same idea as wearing a badge holder, or a chain for reading glasses.

How long does it take to crochet mask lanyards?

Do I have to sew buttons or metal clips onto a crocheted mask lanyard?

No. It’s possible to crochet the whole lanyard, even the fasteners! That’s what it means when a crochet project is “hook-only”. 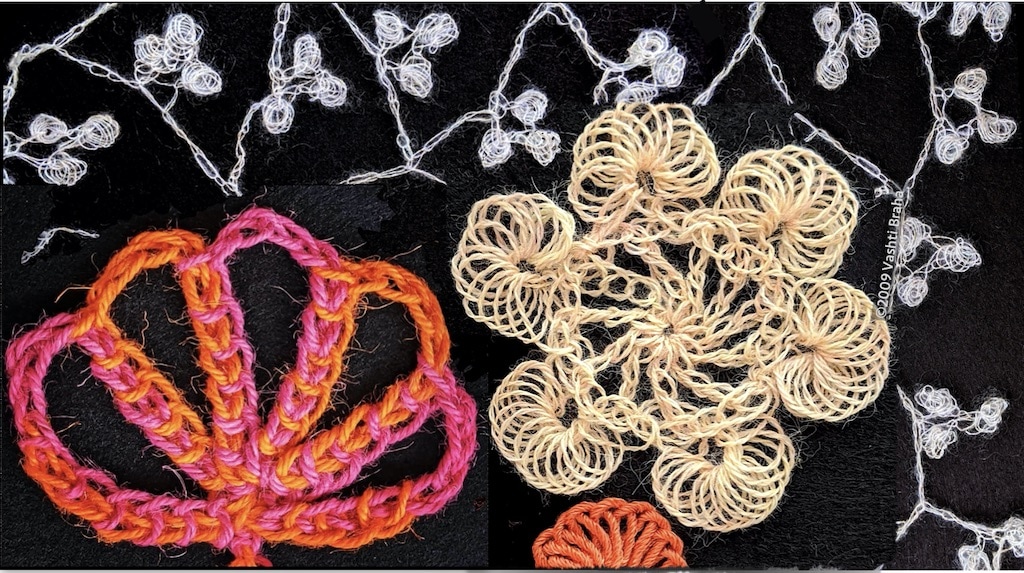 The limpet stitch crochet topic evolved dramatically in the ten years since I wrote my third newsletter about it. As of September 4, 2020, this greatly updated version is now my ultimate resource page for crocheting limpets, limpet variations, and more reasons to crochet with half hitches. It even has a timeline and a table of related terms.

Issue #003 went out to just over 370 subscribers in 2010. That’s about 70 more than for issue #002. I remember feeling very encouraged by that. One of my early goals was to find likeminded crocheters. Back then, the only folks talking (enthusiastically!) about the limpet stitch, like Mel, Myra, Barbara, Margaret, and Pippin, were members of FFCrochet, the International Freeform Guild (INTFF) yahoo group. Limpet stitches have expanded their reach, as you’ll see below.

I’ve been looking forward to writing up a little love letter to the Limpet Stitch. It’s not like any other crochet stitch because it is a fundamentally different way to add loops onto the crochet hook. (September 2010)

The first thing a crocheter learns, after making a slip knot and putting the loop on a crochet hook, is to yarn over (wind or wrap the yarn around the crochet hook). We can’t make any basic stitches without it. Strictly speaking there’s only one way to do it. If you wind the yarn around your hook the opposite direction, it’s a yarn under. (Read all about yarn overs, yarn unders, and reasons to use both.)

There are other ways to add new loops to the crochet hook beside yarning over (or under). The one we use for limpet stitch crochet is challenging at first only because changing how you yarn over feels very alien! It’s actually simple, easy, and quick to do. The limpet stitch has an avid fan club.

Beyond the Standard Yarn Over

From a crocheter’s point of view, limpet stitch yarn overs have an added half-twist in them. In the photo at right you can see how the two loose loops on the hook have a little twist at the bottom of them. Adding the half-twist as you yarn over is a neat trick.

This simple little twist is powerful. It is the basis of all needle lace, macramé, and tatting. It’s fundamental to sewing and embroidery. Latch hook rug making requires it, and bobbin lace starts with it. It’s the simplest cast on in knitting.

Making room for it in our crochet toolbox means reclaiming the DNA that crochet shares with these other string arts. You may wish to make room for two more, like I have. The little half-twist can turn in two different directions: to the left (counterclockwise), or to the right (clockwise). The two loops in the photo turn to the left, as if a cursive letter “e” is written backwards: “ɘ”. 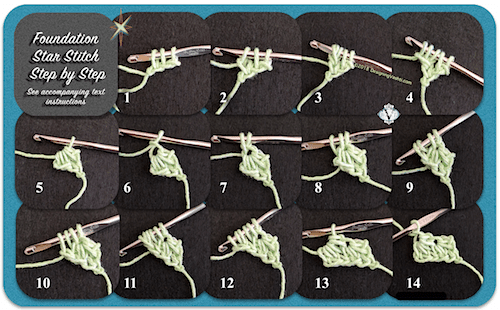 It’s the perfect way to start a Starwirbel! We’re going to use it in the upcoming Starwirbel Way class this July. (CGOA Chain Link conference this July in Portland, Oregon).

For this unusual stitch, two foundation chains must be created as you complete each star. In the text instructions below, a [bracketed number] refers to a numbered photo step above.

Tips: Pinching also helps you recognize which loops are the new foundation chain loops. Pull up loops loosely enough that a second crochet hook could fit in them. 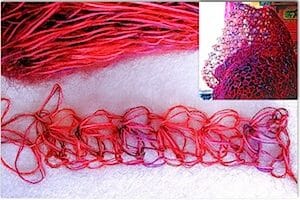 *Pull up a loop in each of these places:

Repeat from * for each new fstar. 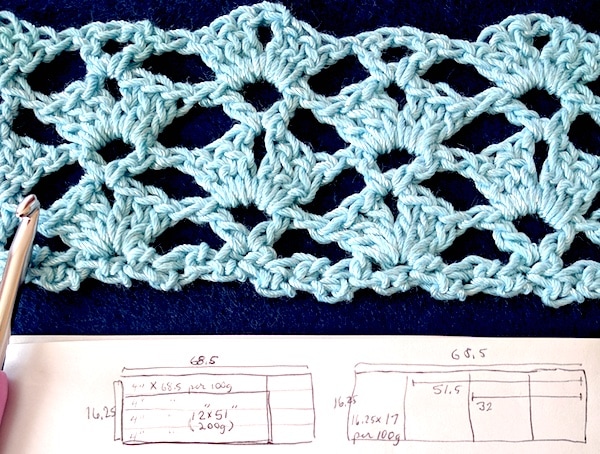 Designer Andee Graves featured our Lotus yarn with her new Shining Day Wrap crochet pattern. She’s one of CGOA’s 2018 board members. At her blog she explains,

“There will be 3 other patterns available free for CGOA members only, each only for 1 week. Be sure you’ve renewed your membership or joined CGOA before you miss out!”

Today is the last day you can get this pattern for free.

Why? It’s part of the 2018 CGOA NatCroMo celebration and this one is free for everyone—CGOA members and nonmembers.

Shining Day is crocheted in a lacy stitch pattern that is flowing wonderfully off my [pink] hook. I think it flows so much because you crochet into chain spaces at an easy gauge.

This wide lacy rectangle is worked from the center out on both sides of the foundation row. You’ll have matching ends, each with a pretty picot border.

For a design like this, you wouldn’t want the foundation chains to look noticeable or feel tighter than the rest of its flowing lace. No problem! Andee uses a great type of foundation row. It’s not only stretchy, it has a nice texture that blends in.

Some folks have wisely been ordering Lotus Z-Bombes, which are value-priced one-pound cones. One pound of Lotus is a bit over 1,100 yds, or about 4.5 balls. (I always allow a Z-Bombe to go a bit over a pound after subtracting the weight of the cardboard. I write the exact unique weight of each Z-Bombe on its tag.)

In my recent newsletter issue #90, I mentioned a multicolored Shining Day using a six-pack of Lotus Snacks. I think spring fever made me do it. I kept picturing a riot of floral colors like I do every spring.

Unfortunately I miscalculated the yarn amount for that in the newsletter. The mini Snacks are one-third the size of a regular Lotus ball: 85 yds per 33 g. Not one-half.

CORRECTION: A Six Pack O’ Snacks totals 512 yds, not the 768 yds I stated in the newsletter.

See my drawings above in that photo of my light blue swatch? That’s me figuring out that a two-ball (same as six Snacks) Shining Day would come out to 12″ X 51″ (or a bit longer).

My swatch is 11.5″ wide. I needed 46 foundation stitches to do 4 stitch pattern repeats.

Andee’s Shining Day pattern is definitely worth paying for if you miss the free version. It includes stitch charts and a photo-tutorial on making the picots.