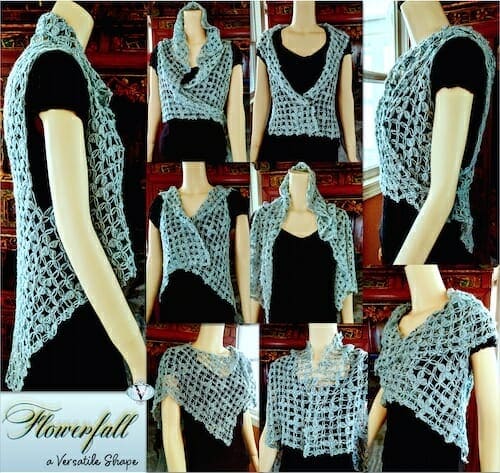 Remember my Crochet Class in a Vest blog post about a week ago? I’m happy to report that Flowerfall is progressing nicely through the pattern writing obstacle course. View full size image.

Watch me open the armholes after I finished crocheting the lace: Snip & Unzip An Armhole. These self-healing stitches don’t mind being cut. It’s the low-stress way to create armholes. Really! Much easier than breaking the crochet flow to place them correctly.

Flowerfall is a modified diamond shape: imagine a diamond with its top and bottom corners lopped off. You start crocheting the shape at the left front corner and end at the right front corner.

When you wear it upside down, the hem ends at a different place and the amount of fabric in the collar changes. (It’s also reversible.)

The armholes are generous and not centered, which increases its wearable ways. You can even treat the armholes like head openings. That results in a poncho look, see the bottom images.

An older design, the Leftfield Diamond, is the first time I crocheted this shape. That’s when I found out how versatile it is.

See the top right-hand image above? There’s a hint of a tie belt at the waist. It inspired me to add ties to the front corners for a wrap belt option. These are removable and repositionable, with a petal-like accent that echoes the chained petals in the stitch pattern. I don’t have photos of them yet.

You can keep up with Flowerfall at its project page. It’ll work out great for at least two of my class topics: 21st Century Love Knot Adventures and Self-Healing Stitches & How to Cut Them. 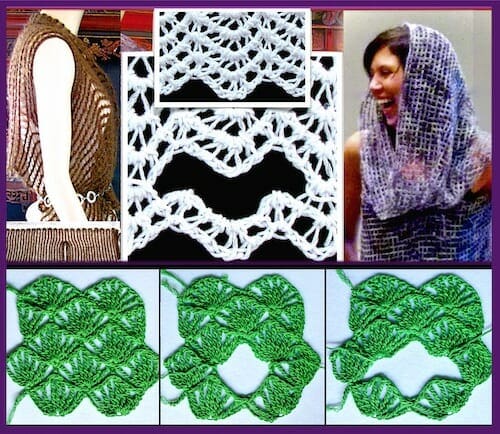 Up to date as of 4/11/18. This page will likely be updated again before class time and possibly after.

This page is a conveniently clickable group of things I mention in the Self-Healing Crochet Stitches and How to Cut Them classes. I teach the next one on July 28, 2018 in Portland OR. I show a lots of published and unpublished designs in this class! Each illustrates the stitches and techniques learned.  — Vashti Braha

Considering signing up for this class? Read Why “Self-Healing” Crochet Stitches?

Steeked Crochet Designs by Others 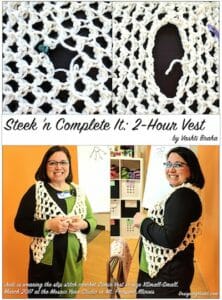 Self-Healing Crochet Stitches and How to Cut Them started out Tunisian-only in 2016. It was originally titled Steek (Cut) Tunisian Crochet Lace for Fun, Fast Fashions. (I overhauled the title to help differentiate this topic from steeking knit fair isle sweaters and other traditional reasons for steeks.)

Three strong fashion trends are relevant to this class topic: graphic/linear texture, net lace, and fringe. I’ve created a Pinterest board for each trend.

Any Books on Cutting Crochet?

I’ll add information here as I find it, so please check back. (In 2016 I found nothing in books on specifically steeking Tunisian crochet. (If you know of a source, please leave a comment.) 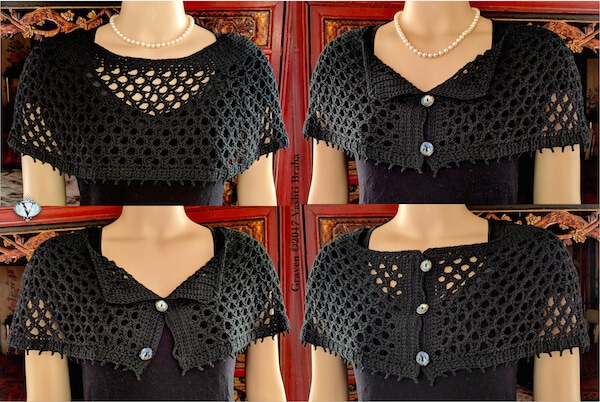 I traveled over the weekend to attend a memorial service for the sudden death of a beloved uncle.

The chapel accommodates 280 people, and 360 attended. Fortunately the weather was ideal (around 80º and sunny) so that the building could be open on two (maybe three? sides. The overflow of people could sit comfortably outside and feel included.

I designed something specifically to wear to this event and had two weeks to make it. That includes all swatching, blocking, and any do-overs.

I had to rule out my very first idea: to crochet a Chanel-style jacket. Instead I started imagining something that would take two balls of yarn or less.

The second limit was its style and color.

Graven would have to be far more subdued than my default personal style, so I ruled out several initial ideas. It also had to be solid black; a challenge because that’s not what I tend to crochet. Sure, I often wear black clothing as a plain first layer that forms a background to a (sometimes crocheted) lighter-colored layer. I struggled at first to picture wearing crochet in solid black on a sunny Florida morning, not for evening, or in a northern office.

Result: I wore Graven all day. It was mostly easy and comfortable to wear, and felt elegant and proper style wise. I did have to adjust it periodically so that the buttons stayed centered. (I think this is because I accidentally increased some rows unevenly.)

It had to work with my dress and high heels.

The dress was a simple sleeveless deep V-front shift made of an inky black pima-modal fabric. Its surface had a woven linen look but it was actually a fine knit. Very comfortable to wear in Florida! It needed a dressy covering for the upper arms and chest though.

Result: Armed with these three requirements, I narrowed down my project to a fairly traditional shoulder covering, crocheted in a fairly tame lace stitch texture, with a polished-looking yarn that’s not too thin or thick: a capelet in Tunisian crochet with Lotus. (Our “Black Gleam” color matched the dress! whew.)

Other Requirements I Hoped to Meet

Learn something new about crochet: this was the first time I tried doing a Tunisian “wicker” mesh in short rows with a built-in shaped collar, and a distinctive twisted-loop edging at the hem.

Use yarn already in my stash, ideally my Lotus yarn. I try to feature a different Lotus color each time I design with it. This was the first time I designed with the black.

Try out a trendy style: The trend of using mesh textures in a modern, sort of sporty way inspired the stitch pattern. (The edging later added more of a medieval-ish wrought iron look.)

Give my handmade item the kind of polish that could even make someone wonder if it was a store-bought designer label. (I don’t know if this actually happened).

I’d do it again. It was a tangible comfort to me.

Although I don’t think I caught sight of all 360 people individually, I feel confident in saying that I was the only one wearing crochet, or even a hand knit item.

To me, fabric has a language, and crochet adds a necessary voice to the conversation, at memorials too. Time spent crocheting Graven was also time spent contemplating the uncle I will miss so much. Crochet caught and is holding my feelings for him. 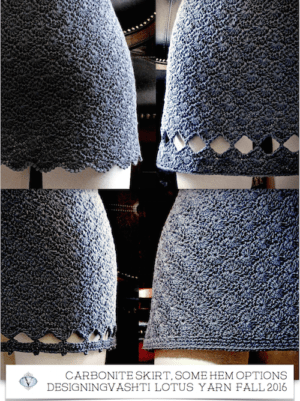 I’m working on a crochet mini skirt! The last time I crocheted a mini skirt was in 2006 for Crochet! Magazine (March 2007 issue). Today I completed the third and fourth ideas I have for a decorative hem.

It may be a trendy item this year, but every fall I want a crochet mini skirt to wear with leggings and boots. This dark grey is a perfect neutral color for me.

I’m calling this design Carbonite after the name of this newest color of our Lotus yarn.

My goal was a solid stitch pattern with a brocade-like texture and a nice drape.

Does the stitch pattern look familiar? It’s a modified “Catherine Wheel”, a.k.a. “sunburst stitch”. This popular crochet stitch pattern is often used for thick wool scarves and afghans. I tweaked it a bit to prevent gaps that commonly happen between the tall stitches of the “wheels”.

I have a few more idea for hems I’d like to try but I don’t want them to slow me down too much. Each time I try a hem idea, I block it, let it dry, style and photograph it. Then I have to edit each photo a bit so that the tones and light levels match ok. I take each photo on a different day and time of day. A few were taken during Hurricane Hermine!

Next I’ll make decisions about the waistband.

This Carbonite crochet mini skirt design has a Ravelry project page that you can check to see more updates.

I wish every crochet garment pattern offered a schematic. It outlines the sections of a garment, like puzzle pieces. Schematics cut through illusions cast by fashion photography and lovely models. A single pattern schematic can distill a fancy design to its simplest essence. I created two Pinterest boards of things that inspire me to steek crochet: Steeks: Ideas and Wearable Simple Shapes.

Schematics also cut through language barriers. I can understand a non-English pattern if it includes a good schematic or two.

I created a few sample schematics for the Tunisian steek crochet class handout and realized how much I get out of them. This would be the next newsletter issue if I had time to do one! (Too much conference prep.)

Update! I wrote newsletter #80, Pattern Schematics for Insiders & Outsiders, three months after I wrote this blog post. Note that shop links in its right-hand column are outdated as of Sept. 2017.

A schematic is sensational to me when a garment that looks chic on a model, yet its schematic reveals that it’s made of simple shapes like rectangles. It’s exciting because every crocheter or knitter first learns how to make rectangles, right?

Sometimes all you need is a rectangle that drapes, or is clingy/stretchy (or all of these). Sometimes weightlessness brings it home, other times it’s a luxuriously weighty swing. The schematic tells you what’s what when you know what to look for.

Sometimes the key to chic is a well-placed seam on a simple shape. Sometimes it’s a special edging. And sometimes it’s the where and how of the steek. Steek crochet for the easy chic of it.

I love this conference prep blogging because it makes me aware of things that I’ve done for years, like collect pattern schematics.