View the image above full size.

Last week I used a new Tunisian crochet stitch to swatch up a few letters of the alphabet. You can see four of the letters above. (The background is something I crocheted for the kitchen years ago.) Just look at what I can spell! I also made an ‘L’ to spell LOVE. I’ll explain how to do the cool Tunisian stitch below.

I’m working on a newsletter issue (#95!) about COLOR. It gave me the idea to crochet a “poster” background for the letters using as many of my Lotus yarn colors as possible.

Does the stitch pattern of the background look familiar? Maybe not—it’s rarely done with color changes. (Not sure I’ve ever seen it in more than one color. I think it’s traditionally thought of as an Aran crochet texture in off-white wool.)

I used this stitch pattern for the Chainmaille scarf, in just one color. The shiny alpaca-tencel yarn gives it a very different look!

Add the Chainmaille pattern to your cart then use the code free-poster-stitch.

For the poster, just use four pattern repeats of the Chainmaille scarf. For the flatter middle section where the letters go, I did the [ch 1, skip next ch-space, sc] part of the stitch pattern across each row for about 18 rows, then resumed the Chainmaille pattern again. Use a shallow single crochet instead of a regular single crochet if you know how. (Keeps the background a bit denser.)

The Tunisian Stitch I’m Excited About!

I don’t know what else to call it but a shallow extended knit stitch.

First you must do a row of Tunisian Extended Stitch (ExtTSS or as I much prefer to call it, TES). It’s how you crochet the next row into them that turns them into shallow extended knit stitches.

Standard return pass: chain 1, then [yarn over and pull through next two loops on hook] until one loop remains on the hook.

To do a row of shallow extended knit stitch: chain 1 to begin the row (count as first stitch), *insert hook knitwise (between the front and back vertical bars) and under the lower horizontal “bump” loop (as seen on the back) of the next stitch, yarn over and pull up a loop, chain 1. Repeat from * in each remaining stitch of the row.

Return pass is the same.

As with all occasions when you’re crocheting shallow stitches, the looser your gauge is, the easier it is to pick up speed crocheting them.

Here it is just a week before I fly out to Portland, Oregon to teach five crochet classes at the Chain Link conference. I have a quick update on my preparations for my class on star stitch lace, The Starwirbel Way!

New Features Added to the 2018 Class

How to use my Star Stitch Foundation

Start a Starwirbel with it, or any star stitch project, instead of foundation chains. Once you try it you won’t want to go back.

How I created a “Flatwirbel”

I converted a Starwirbel (tube in spiraling rounds) into a flat rectangular wrap.How to get the same kind of lace as a flat rectangle? People have requested this for years and I’ve swatched it several times.  I love this one! (Pictured above, in progress.) It retains for me the experience and special effects of making it.

More importantly in the long run, it means we can now use Starwirbel fabric to make anything.

Starwirbel Now has a Stitch Diagram

For those of us who like to use stitch diagrams, we’ll have time in class to go over Starwirbel’s. Star stitch diagrams can be a bit quirky to understand at first. 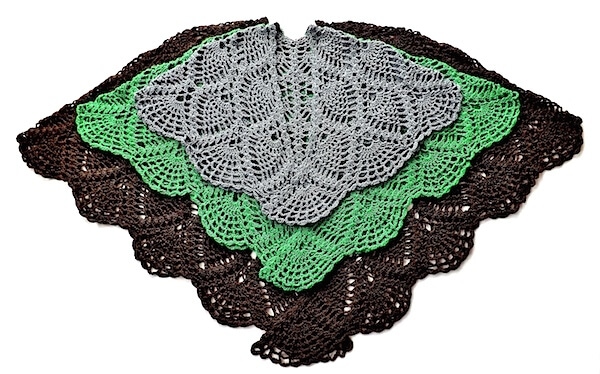 Pineapples are the theme for this year’s crochet conference (2016). CGOA’s Hall of Fame Award winner happens to be a pineapple lace queen!

You know these are freshly crocheted because the colors are the new ones we just received from the mill. Even my husband is amazed. (Not shown: Lavender Ice. That’s for another day.)

If you’ll be attending the conference this month, come by our booth #203 (on the right after you enter the market). Lots of pineapple lace to see and try on!

Now that the new yarn shipment is here I’ll make this a quick post and then go back to checking it all in. I weigh each cone and list it with its lot (a way to keep track of inventory, etc). I’ve learned it’s best to treat each raw cone from the mill as a unique item. Each has a different amount of yarn on it and is part of one particular lot.

I took the speediest photos I could. These five colors all fill gaps in our existing range. That’s a total of twenty Lotus yarn colors.

I’m pleasantly surprised by the rich and elegant look of the new colors. The orange could have been bright; instead it’s warm and rich. The emerald green is a full jewel tone. Even the neutrals are rich-looking and make my fingers itch to crochet them (it takes a lot for a neutral to hit that spot for me).

The ideal name for each color meets three priorities in this order:

2018 update: The color names Doris and I settled on are: Lavender Ice, Emerald Deep, Lustrous Tan, Carbonite, and Orange Luxe. (Links go to projects that show off these colors in good lighting or with contrasting colors.)

I’ve mostly blogged lately about getting ready to teach and have a market booth at the big crochet conference next month. Here and there I’ve mentioned some special events I also plan for, such as the fashion show banquet and design contest. This year I’m making special preparations for the Hall of Fame event when my friend accepts the CGOA award.

The CGOA Hall of Fame recipient for 2016 is my close friend Doris Chan. We met at CGOA’s 2004 conference in Manchester NH. There could be no Lotus yarn if we’d never met.

For the past few days I’ve been tracking down which of Doris’ earliest designs I have. My mom has the most important one of all, and she’s in Iowa. Back in March 2004 I used a pattern by Doris called Celebration Shawl to crochet a Mother’s Day gift.

Back then I had no idea who designed the shawl I made. I just leafed through my issue of Crochet! magazine and thought it looked like fun to make. The yarn was soft, cheerful and warm. I knew my mom would enjoy wearing it in a dreary Iowa winter.

Doris didn’t know that her design had been published somewhere. When she saw the bag I made to go with it, that really threw her off. The bag wasn’t part of her pattern. I just crocheted it on the plane from the leftover yarn.

Of course she had to ask me about it, and the rest is history. The next year I crocheted her a silver wire bracelet that is a miniature replica of her shawl pattern. (Blue bugle beads kind of look like Fun Fur yarn, right?)

Twelve years later, Doris gets the Hall of Famer CGOA award! This will be a very special conference.