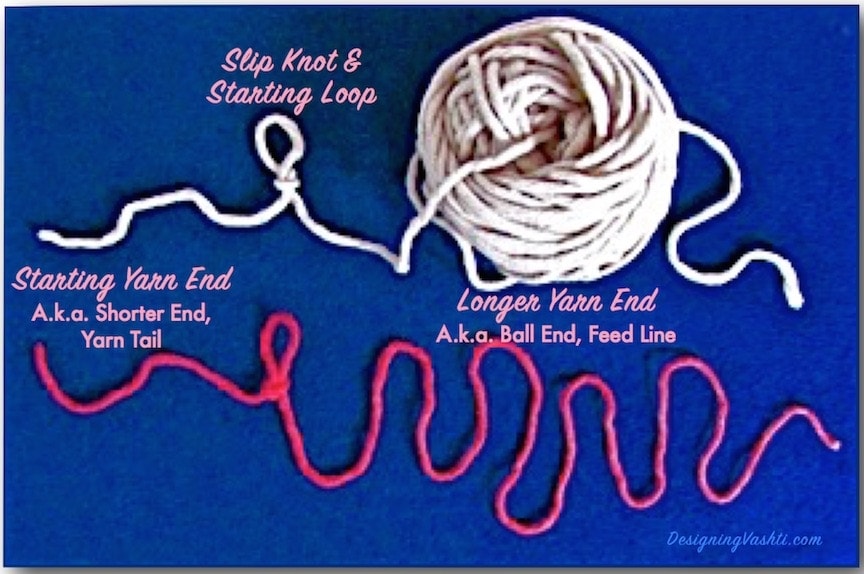 Some folks call the short end the “yarn tail” and the other end the “supply end” or “the yarn coming from the ball”. View full size.

More to It Than it Seems

Crochet beginners need to know how to leave a long enough one (see #2 below) when they making their basic slip knot. Of course the other thing to know is which end to start crocheting with, and if beginner chooses the shorter end they figure it out soon enough!

Very little is usually written or said about the starting yarn end. What else is there to know? The starting yarn end comes with built in decisions—decisions we non-beginners may not realize we’re making. I’ve listed five below. If you’re a new crocheter, just read through them for now.

If you’re new to using yarn as well as new to crocheting, keep the yarn simple for now: use a 36″ or so {91 cm} piece (I mentioned it previously). A shorter yarn length like this avoids unnecessary yarn-based issues, like whether the yarn is in a hank or other difficult-to-use form, or how to even find the yarn end when it’s tucked away well.

This will also make it easy for you to keep both ends of the yarn in sight at all times. The first end we use is the starting end (or occasionally a yarn tail), and the other end is called the longer end, ball end (because it leads to the rest of the yarn), feed line (feeding from the ball), working end, supply end.

We make five decisions (maybe more) with the starting yarn end every time. They’re hidden because most of them are made automatically, or are not seen as having options.

Every ball of yarn has two ends. Depending on how it’s wound, you may have easy access to both: one wound around the outside of the ball, the other coming from its center. (See example in the upper photo). The end in the center can be surprisingly hard to find! When you do it will be wrinkled. The outer end is smoother and easier to find.

The first decision we make is which end we choose as our starting yarn end. Sometimes it matters (that’s for a future post); often it doesn’t. The center end is my first choice because the ball won’t roll around as I pull more yarn from it.

The next decision is how close to this end we make the starting slip knot. In other words, how long should the starting end of yarn be for a crochet project?

The standard guideline is 4″/10 cm long. Why? It’s just long enough to be threaded onto a yarn needle later and woven in (sewn securely into nearby stitches so that it stays invisible). It’s not too long to waste yarn or get in your way.

A common exception to the default 4″-long starting end of yarn is 6“/15 cm long, for example when the yarn is especially slippery. Some yarns need more weaving in to stay put.

⚠️Never snip the yarn end close to the knot unless you’re specifically, rarely, directed to in a pattern for a certain effect, such as for stubby fringe. It otherwise looks poorly finished. Worse, it could loosen and cause seams or other stitches to unravel.

3. Which Kind of Slip Knot?

Most crocheters always use one of two types they learned as a beginner, so this counts as a hidden decision. Knot tyers know several more, and some offer extra features. More experienced crocheters avoid the knot part and just wrap a loop around the hook for their starting loop. (A chain stitch is self-knotting at its base, so a starting knot is optional.)

If you wish to have beads strung on your yarn so that you can slide them up and into stitches as you crochet them, string them onto the yarn before you make that slip knot. You could cut the yarn later to string beads on, but the knot you’d add would be pretty inconvenient with beads. (There are alternate ways to add beads, which is for another post.)

Give the starting yarn end some odd jobs to do. A few of these tasks below count as beginner-level, especially the first two. Some may take a bit of planning ahead, so once you make that slip knot, you’ve essentially made a decision against certain special tasks.

The starting end is already securely attached, so you can use it to hold extra yarn in reserve for later. If you had to attach a new piece of yarn later for the same tasks, you’d have three yarn ends to weave in instead of just one. Keep this list in mind and you won’t underestimate the starting end of yarn as your skills grow.

⚠️When a starting end of yarn is very long, beginners are especially at risk of confusing the ends. Make sure you don’t crochet with the starting end instead of the ball end.

1. Sew/String on Buttons and Beads

I’ve often used the starting end of yarn for the first two tasks for crochet jewelry. By now I reflexively leave a longer end when I swatch a new jewelry idea just in case I need it; also see #3 below.

For some projects, a much longer starting end of yarn can be reserved for seaming later. It’s the best yarn for this because it’s already attached, and I often prefer a crocheted seam. I don’t always know how much yarn I’ll need for the seam; my general guideline is to multiply the length of the seam by 3 or 4 for a slip stitch seam and longer for a single crochet seam.

For this option, and for the next one, it helps to wind the starting end of yarn onto a bobbin or scrap piece of cardboard.

Sometimes when designing new crochet jewelry I’ll use a long starting end of yarn to crochet a clasp  later. At least 36″/91 cm long gives me options for adding a range of jewelry clasps without having to attach a separate length of yarn.

You might start off crocheting a long starting yarn end together with the ball end. I’ve done this when starting at the center of a rectangular or oval shape so that the foundation chains are more substantial, since I’ll be crocheting Round 1 into both sides of the chains. In other words, I’m crocheting the foundation double-stranded—with two strands held together—but I didn’t need to add a separate length of yarn (with two more ends to weave in later!) to do so.

For small projects and simple edgings, you don’t need a crazy-long starting yarn end. An edge of slip stitches and chains or of single crochets would require roughly the same amount of yarn as a crocheted seam (see #2).

I’ve done this most often with coffee cozies. With the starting end of yarn I slip stitch around the bottom rim to firm it up. It also looks nice.

6. Improve a Join or Add a Few Stitches Later

Sometimes a beginning is prettier when you save it for the end! For newer crocheters, this means you don’t have to sweat what your first round of stitches looks like, especially if it’s a spiraling round. Maybe it looks stringy, uneven, or lumpy. You can use your starting end and a yarn needle to smooth the area with a few darning stitches where you joined your round. Or, slip stitch a new edge with a crochet hook (see #5). It may help to unravel the starting knot first.

A more advanced example is when I start a shawl in one corner and it has a fancy built-in edging. I can get its edge to look like the other corners if I come back to it and crochet its first few stitches last. It’s a low-stress option that also makes the pattern easier to write and to follow.

There are probably many more handy uses for a long starting yarn end. Have I left out any special tasks?

The starting end of yarn determines whether your starting slip knot is fixed and secure, or can be pulled loose enough to allow a seam to unravel! See my earlier post about these two different slip knots. Look closely at the starting yarn ends.

1 thought on “Starting End of Yarn: No Small Thing!”